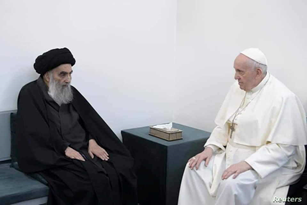 The Pope’s historic visit to Iraq gives hope to Iraqis for peaceful coexistence inside Iraq and with other religions in the world.

As an Iraqi who has lived his entire life under dictatorship, amidst a state of war, foreign occupation and the rise of violent terrorist groups such as ISIS, the visit of the Catholic Pope to our country was something I never thought I would see. My entire life, Iraq has been controlled by people who promoted division and hatred and sought to keep our country separated from—as opposed to connected with—the rest of the world. Despite promoting himself as a secular leader, Saddam Hussein’s rhetoric against Western countries convinced us that all Christian authority figures, including the Pope, were part of a conspiracy to destroy our country. Though he promoted coexistence between Muslims and Iraqi Christians, foreign Christians were seen as collaborators with Zionists and Jews, and therefore could not be trusted.

After 2003, this type of rhetoric increased with the rise of both Sunni and Shi’a extremist groups in the country. The most radical of these groups, ISIS, explicitly condemned all Christians as heretics who deserved to be killed. Even though Shi’a groups did not go to such lengths, they confiscated the majority of Christians’ properties and premises in Baghdad and other provinces under the excuse that Christians were affiliated with Saddam’s regime. Besides, they reinforced the idea that the Christian world was part of dar al-harb, or the “world of war”, an alliance of enemy countries whom we as Iraqi Muslims should be afraid of. Though publicly many Shi’a and Sunni religious leaders adopted the stance that Iraqi Christians should be respected, in reality their rhetoric encouraged Muslims of all sects to be more hostile towards Christians in general. Many regular Iraqis began to view Christians of all nationalities, including Arabs and Iraqis, as collaborators with the American occupation. Often they failed to distinguish between regular Christians and countries like America who invaded Iraq and had majority Christian populations.

Is it any wonder then that many Iraqi Christians have fled Iraq since 2003, either to foreign countries or to the Kurdish Regional Government (KRG) region in northern Iraq? Unfortunately, this is a shame that many Iraqis will have to live with for a long time. There were instances in the past where it was rumored that the Pope would visit Iraq. However, on every occasion political developments prevented this from happening. In the early 1990s, the Pope was supposed to visit Baghdad, yet he had to cancel his trip after the invasion of Kuwait and the first Gulf war. The country was simply too dangerous for him to visit. After the spread of sectarianism throughout Iraq that I described above, with large parts of the country controlled by armed radical groups, it became even more difficult.

Therefore, the Pope’s visit to Iraq last month, however devoid of any direct practical outcome, was a huge sign for me and millions of other Iraqis that the state of political isolation we’ve lived in for so many decades may finally be ending. His visit gave us hope that one day we can become integrated into the world community and finally break free from the dictatorial, sectarian religious radicalism that has consumed us since 1958, before I was born. The fact that the Pope met with Ayatollah Sistani, one of the most prominent Shi’a clerics in Iraq, is also very significant. Though more moderate than other clerics, Sistani has been viewed by some in Iraq as a source of sectarianism. The fact that he is willing to meet publicly with the Pope shows that we as Iraqis are finally ready to move past sectarianism. I hope others follow his example.

This memorable moment has both religious and cultural value. Therefore, a series of challenging questions could be asked from the perspective of a BCS student: How does the West see this event? What about the Orient? How would Edward Said explain this encounter? Would imagology help? And how would postcolonial studies enlighten and encourage us to reflect on this matter?